March 23-25, by Heather    Over the last 2/3 days I have labelled the fruit trees on the common, the extension of the community orchard, featured in last month’s Chippy News. They are Gages, Plums and Damsons.  All are in bud and the damsons almost have blossom.

March 25, by Heather  The orchard is an ideal place to take your daily exercise – so peaceful. Serenaded by the robin, and enough people walking the footpath to add a human touch. I intend a daily visit there, but whether I’ll keep that up I don’t know.

March 25, by Simon Last autumn we were working in William Fowler Wood when we saw a spindle tree showing off its pinky red seed capsules and orange berries. The person beside me said, Oh, look at that! and I decided there and then to introduce it into our Fitzalan Wood, in part having in mind that a little time before a fellow-volunteer had rightly said we needed more colour down there.

So in the Spindle we have a colourful native tree (yes, even though it’s Euonymus europaea) which gives much pleasure. What’s more, one known as an indicator of ancient woodland, which Earl Fitzalan would have brushed past on his medieval charger as he galloped to set his seal on the parchment granting Chippy its well-loved common land. It was a must-have.

Then, not long ago, my sister said she wanted a couple for her new shrub corner. I drew a blank at local garden centres but found that at online prices you could buy ten for little more than the cost of two. So Sis. got her wish and I did too. Usually kept pruned to bush size, it can grow into a tree 2o feet tall and the same in spread, which is an awful lot of spindles for spinning your wool, or even more skewers if you’re a very traditional butcher.

My solitary work in the Ale Wood yesterday consisted of:  undoing cable ties and storing them for future use;  easing plastic guards off the young trees, either by moving them upwards, or being forced to cut them. Then assembling the guards, sometimes with the supporting sticks.  I will give the cable ties to James at a later date. [James now owns  the land and manages  the Wood, originally planted under the auspices of The Woodland Trust. Ed.]

Beautiful day – I very much enjoyed the time spent.

I recommend the orchard.  It is my daily exercise. The bank at the top is full of primroses and the irises are poking up in the bog/stream. Usually it’s the robin, but this morning it was 2 wrens vying with each other (or maybe courting each other) with their shrill tones. 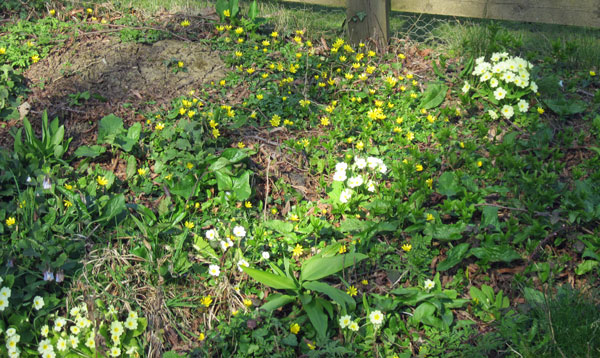 Lots of work [in the Orchard] went on today.  Thank you to Fran and Rachel Mc for professional work around the Red Devil, the Quince and the new damson tree with a German name that I’ve failed to carry in my head.  When I arrived this afternoon, to free three more soft fruit bushes from choking weeds, I was greeted by the sight of a half finished hurdle, courtesy of the Norris team.

A Mum and little girl came by.  The child is watching every day for the apples to come!  I suggested she checked for blossom, but before that watched the progress of the new hurdle!

March 27th, by Fran [with a more modest take on the weeding round trees. Ed.]

Rachel and I did a little work in the orchard today. We tidied round 3 trees, strictly speaking 2 and 3/4 . I will return and complete the Red Devil tree but it beat me this morning. Despite recovering well [from a pre-pandemic illness] I do get wiped out far more quickly than I like to think . 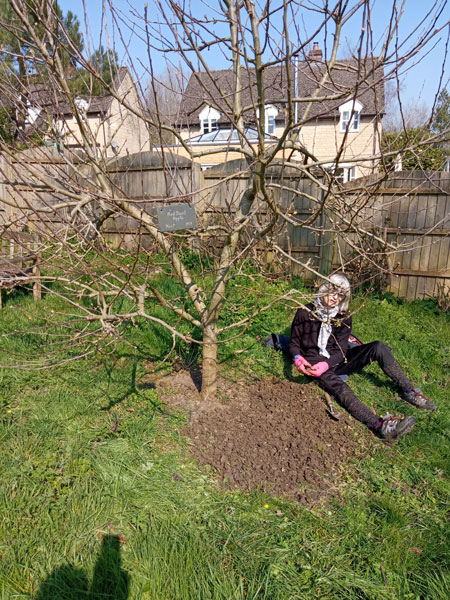 A well-earned rest – photo by Rachel Mc., whose part-selfie appears in the bottom left-hand corner. 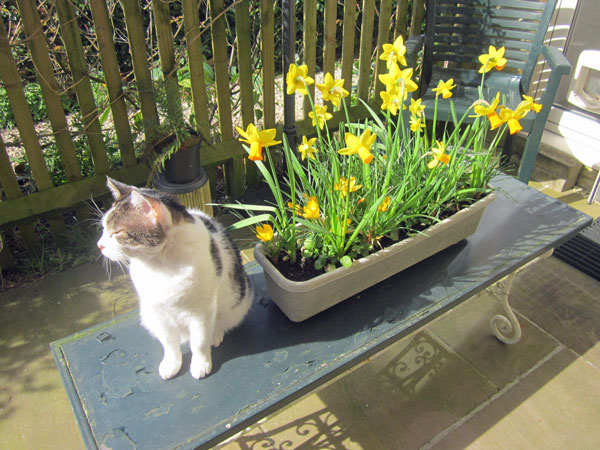 Two fields away from the Orchard, Jenny’s cat Barney also takes a rest.