We work at the Glyme Valley Nature Reserve  in Chipping Norton, which is managed by BBOWT (the Berks, Bucks and Oxon Wildlife Trust).

Here, our clearance of invasive blackthorn scrub invading the ancient limestone grassland aims to benefit butterflies and flowers, while the dense thorn bushes lining the margins of the reserve remain as a birdlife habitat where species such as blackcap, bullfinch and yellowhammer can be seen. 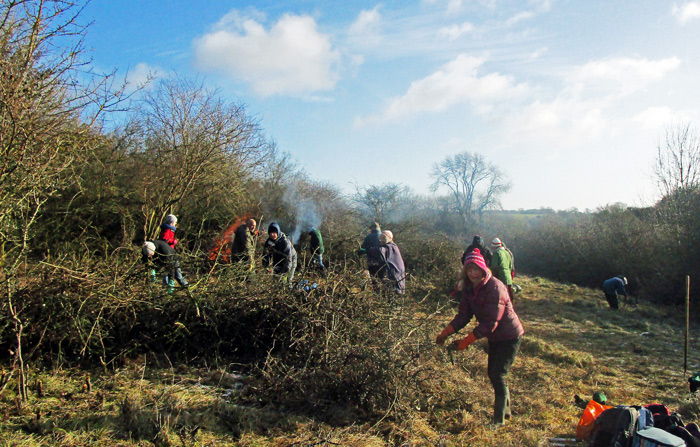 We have also worked at BBOWT’s Hook Norton Cutting nature reserve, on the old Cheltenham to Banbury railway line,  which is of special geological importance because of its exposed Jurassic oolite limestones which contain many fossils, and are stained red by the presence of iron oxide. We cleared the access to a notable rock face, and on other parts of the site, cut back brambles and scrub to allow wild flowers and butterflies to flourish. Above and below: in September 2015 we cleared access to one of the limestone cliffs. Working at the Hook Norton (south) Nature Reserve in January 2013 In welcome February sunshine after the 2013-14 winter deluges.